Treating a Dog With Bad Behavior

Dealing with bad behavior from your dog can be a problem that may seem at times to be too much to handle. Your dog may begin disobeying you in small ways, but that can easily transform into more aggressive actions and poor habits if you don’t put a stop to it. 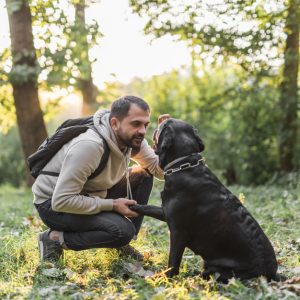 The key to treating a dog with bad behavior is to learn what is causing your dog to misbehave and that can help you find a solution.

Most pet dogs like to be included in all your activities since they feel as if they are part of the family. Ignoring them or leaving them out of most of your family events can cause separation anxiety, resulting in unacceptable behavior.

Dogs going through their adolescent period will normally try to rebel against your usual routines. If your dog refuses to let you put on its leash or refuses to sit when commanded, it’s an indication that your dog is trying to better its ranking as an alpha dog. In other words, the dog is trying to one-up you in the game of “who’s in charge here.” Giving your pet firm commands while remaining calm will show it who’s in charge and help control its bad behavior.

If you’ve recently acquired a normally calm and friendly breed like a Labrador Retriever or Golden Retriever and it suddenly attacks another dog or a person, the problem is not a simple behavioral issue. Aggressive acts and unpredictable behavior like this usually indicates poor breeding practices. It can also be due to several other reasons such as puppies feeling pain from teething, feeling threatened, feeling pain from an injury, prior abuse, or a female dog that is in heat. If your dog is a puppy and nips or bites at you, saying “no” very strongly will usually startle it into quitting the disagreeable behavior.

A dog with bad behavior is not appreciated by anyone. When dogs become overly excited, especially small dogs, they often tend to urinate uncontrollably. This may happen when you begin playing with your dog or when a visitor, whether a stranger or frequent guest, comes into your house. This behavior can typically be traced to the fact that a dog is not being walked and exercised enough and its stored up energy results in urination problems. If you punish your dog and it doesn’t understand what it did wrong, it may urinate out of sheer nervousness.

Begging stems from natural instinct, improper socialization, boredom or desire for your attention. To stop this bad behavior feed your dog on a regular schedule and don’t give it snacks in between meals. Always ignore your dog when it begs.

Chewing on objects is part of the natural teething process in puppies. It may also be attributed to boredom, separation anxiety, undernourishment, or lack of sufficient exercise. If your adult dog is an obsessive chewer, you can put a little hot pepper sauce, or vinegar and hot mustard on items the dog should not be chewing and the taste will be enough to discourage that bad behavior. If your dog is chewing on items that can’t be coated with one of these substances, Petco and PetSmart have products to prevent unwanted chewing of objects.

Having your dog jump on you whenever you arrive home may seem cute, but most friends and guests won’t appreciate the enthusiastic behavior, especially if your dog is a larger breed. Consistently discourage the practice at the first signs of this behavior by voicing a firm “no.” To discourage such behavior, ignore your dog and avoid eye contact when it jumps on you. Tell your dog to “sit” and then reward it with a treat when it obeys. Daily exercise also helps to reduce the dog’s excess energy.

Treating a dog with bad behavior, especially an adult dog will be a lot easier if you think of your dog as being like a two year-old child. It needs to be trained and constantly reminded of what is proper behavior and what is not.