This is a great article published last week in The New York Times and we wanted to share it with all our readers who missed the opportunity to read it:

“ What a menu. Pan-seared duck with brown rice and blueberry compote. Roasted turkey with butternut squash and russet potatoes. Salmon with black-and-white quinoa. 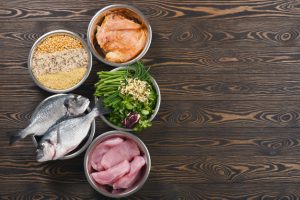 Delicious – but this is not a new high-class New York restaurant – it’s dog food. Not mere Alpo, mind you — not by a long shot. And to prove it, a company called Petcurean Pet Nutrition, is offering a taste. If you’re wondering why anyone would even consider noshing on dog chow, you haven’t been to the Global Pet Expo here, where the impresarios of America’s thriving, multibillion-dollar pet economy profitably ply their wares. Even as the economy for us humans bogs down again, the pet economy has proved remarkably resilient to a weak housing market, high unemployment and those diminished 401(k)s.

The pet food industry has continued to grow through the current recession, albeit at a slower pace, and last year, Americans spent a record $55 billion on their pets, according to the market research firm Packaged Facts – more than the gross domestic product of Belarus.

Wherever the stock market goes — and lately, it has been going down — this nation seems to be in the thrall of a great bull market for pets. And high-priced, “human grade” pet food is only the beginning.

Pet owners, or “parents” in industry parlance, are being sold on human-style luxuries and medical care. There are stylish rain slickers, organic foods and even antidepressants for today’s pampered cats and dogs. If more evidence of this boom were needed, consider Neuticles, prosthetic testicles for neutered dogs and cats, at about $1,000 a pair, which, their designers say, help “your pet to retain his natural look, self-esteem and aids in the trauma associated with altering.”

The growth in the pet market last year was driven in part by a 7 percent increase in veterinary services. America’s pet population, like its human one, is living longer. Human medical technologies are increasingly being used for pets. Dogs’ and cats’ owners — particularly those without children at home — are taking better care of them, both medically and nutritionally, experts say.

“Pet owners aren’t just looking to provide a home for their pets,” says Bob Vetere, president of the American Pet Products Association. “They are investing in their pets’ quality of life. Oftentimes they do this at their own expense, cutting personal expenses, but not those affecting their faithful companions.”

Jessica Taylor, managing editor of Petfood Industry, says that when she started at the magazine four years ago, the pet food industry lagged human trends by a year or more. Now, it is just six months behind, or less. She predicts that blueberries and pomegranates, whose antioxidant wonders have been marketed to humans in recent years, will be the next big thing in pet food.

The pet industry has long considered itself recession-resilient, and it proved just that during the recent downturn, despite some bumps along the way. Sales growth of pet products slowed, particularly among “hard goods” like leashes and bowls. But they were still up — which is more than you can say for many industries. Analysts say the pet industry will continue to rebound, driven by demand for veterinary care and health-related products, including premium treats and chow for dogs and cats.

Expected demand for luxury pet products is strong enough to lure companies and even celebrities into the business. Among them: Martha Stewart, Ellen DeGeneres, Fisher-Price and General Nutrition Center, which now offers health supplements for pets.

Wall Street is bullish, too. Shares of PetSmart, the pet store chain, are hovering near a record high, at $43.46 a share. In its most recent quarterly earnings report, the company said same-store sales had increased 6 percent over the quarter a year earlier.

PetSmart’s main competitor, Petco, is privately owned and doesn’t publicly report its earnings. But Jim Myers, Petco’s chief executive, says his company did not have a single negative quarter throughout the recession. Fewer people traded up to more expensive items during the downturn, but he said they didn’t trade down, either, sticking with a “premium and higher-level range of food products.”

About 62 percent of American households have a pet, with dogs accounting for 40 percent of the total. Cats are second, at 34 percent. Dog and cat ownership has continued to grow slightly in recent years, even as the popularity of other types of pets, like birds, fresh-water fish and reptiles, has declined.

Canine Caviar Foods says it makes “the only alkaline-based dog food in America that was specifically designed to prevent cancer.” The ingredients include canned beaver, duck and venison tripe for dogs and cats, as well as a variety of “free-range, grass fed buffalo” treats for dogs. The Honest Kitchen is offering dog food with names like “Zeal” and “Verve” and lists the provenance of the ingredients. There is also organic, fair-trade quinoa from Bolivia and “wild, line-caught Icelandic haddock.” Its food is “gently dehydrated” to preserve it.

Hill’s Science Diet promotes prepackaged meals to help slim down tubby dogs and cats. American pets, it turns out, have weight problems just like many of their owners. Bravo Raw Diet is peddling raw food for pets, which, along with refrigerated pet food, is among the hottest trends in the business. Bette Schubert, a co-founder, says dogs that eat raw meat diets — much like their wild ancestors — are healthier than those that eat processed kibbles.

The idea of eating your dog food to prove its wholesomeness didn’t originate at the Global Pet Expo. Paul Newman sampled his organic dog food on “The Tonight Show” in 2006. The audience howled.

These days, pet food makers are eating their own products to make a point and close a sale, tasting all sorts of dog treats while tweaking recipes for products.

And for those dogs with a sweet tooth, you can buy cookies and microwaveable cakes for dogs.”

This abridged article was provided courtesy of The New York Times.

P.S.
Next time you have hunger pangs or yearn for a different and ‘exotic’ food, you might try tasting a bit of your dog’s diet – unless you’re feeding it an “el cheapo” brand of dog food.