Biting the hand that feeds you usually refers to harming someone who is helping you. The same meaning applies to a dog who bites when you or someone else is trying to help it. 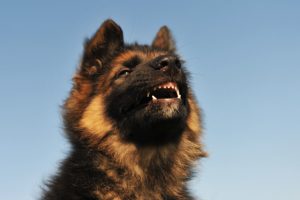 Aggression in a pet dog is a serious problem that must be handled before you or someone else is bitten by your pet. Adults as well as children become frightened if an angry dog suddenly lunges at them. And an aggressive dog who goes too far is a lawsuit waiting to happen.

If you have an aggressive dog, the first thing you should do is make an appointment with your veterinarian to rule out any physical causes for the aggression. If a dog is in pain or a lot of discomfort, it may strike out at you and other people and act mean and irritable. You need to be sure that your dog is physically okay before doing anything about its aggression.

Obedience training is essential for dogs. They need it for socialization and to prevent outbreaks of aggression. Prevention is key, since correcting bad behavior is ten times as hard once aggressive behavior is locked into your dog’s brain.

Aggression can be caused by many things, and identifying the cause is the key to correcting the problem. You must first recognize that your dog has a problem in order to help it before a serious incident occurs. By then it is too late.

There are different types of dog aggression:

There is general aggression directed towards you or other dogs;

A chained reaction stems from fear and territorial aggression as a result of being chained up and being threatened by another dog;

Possession aggression is demonstrated when a dog refuses to share a toy for example.

There are other types of dog aggression, in addition to those listed above:

Cage Rage is often seen when a dog has been severely neglected, as many puppies are who have been bred in puppy mills. After spending months, perhaps years in a cage by itself, or even with other dogs, a dog will begin to see the cage as their territory, defending it when necessary.

Even worse, a caged dog becomes a trapped and cornered dog. In a confrontational situation, a dog no longer has a flight option, and fighting is the only choice left.

Some dogs caged in animal shelters may also demonstrate cage rage. They may not act aggressive, but will display an unruly hyperactivity that discourages potential adopters who believe the dog will be like that all the time. Usually this type of behavior is only temporary and resolves itself as the dog gains its freedom again and is no longer caged up all day.

Dominance aggression is when members of a pack, whether dog to dog, or dog to human, struggle for top position in the pack hierarchy, fighting for the role of alpha dog.

As a dog owner it’s your responsibility to hold the leadership position as the “alpha dog” and immediately correct your pet if it displays actions similar to biting the hand that feeds them. If you do not act confident in your position, you could find yourself being outsmarted by your dog, causing serious behavior problems as your dog grows older.

If you find yourself clashing with your dog over who’s in command, there are a few things you need to start doing immediately:
(1) Enroll your dog in a good obedience class;
(2) When walking through doors, be first in line and first up any stairs you encounter;
(3) Be first getting into and out of the car;
(4) Don’t let your dog decide when to be petted, ignore its pushy nose;
(5) Don’t let your dog up on your bed and don’t place yourself under it – height is a leadership position;
(6) Make your dog work for what it wants. If your dog is hungry or wants water, make it sit first. Don’t pass out treats without a reason. Make your dog beg, sit or obey some other command before offering a treat.

Aggression breeds aggression. Punishment almost always makes the problem worse. Kindness, firmness, and consistency are the most successful ways to handle aggression in any dog.

Your goal should be to have the most loving and caring companion possible and avoid having your pet tagged with the euphemism “a dog that bites the hand that feeds it.” Only you can make that happen.