There are several types of fungal skin infections in dogs, each having a different cause. It is not difficult for a dog to contract a fungal infection from dirt, other infected dogs, and even from another dog’s feces. Ringworm is the most common type of fungal infection affecting a dog’s skin. This infection is not caused by “worms” as its name implies but is caused by fungi. The name “ringworm” derives from the appearance of a dog’s skin which develops red circles and hair loss when infected. 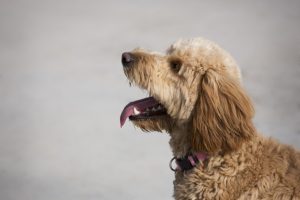 A ringworm infection can easily be transmitted to humans and should be treated as soon as it appears on a dog’s skin. Never touch these sores with your bare hands, instead always wear gloves when handling a dog infected with ringworms.

Several different fungi can cause ringworm. The ringworm fungus is most prevalent in hot, humid climates even though most cases of ringworm occur in the fall and winter.

Ringworm infection can be transmitted by direct contact with the lesions of another infected dog or by contact with a surface contaminated with the spores such as grooming equipment or brushes. Ringworm spores can survive for long periods in the environment, making it possible for a dog to contract ringworm just about anywhere other dogs or cats have been. Young dogs are most often infected, and dogs with a suppressed immune system caused by other diseases or overuse of steroids, are also more susceptible to contracting the disease.

Most healthy adult dogs have some resistance to ringworm and will never develop symptoms from the fungus.

Dogs with ringworm often display a distinctive set of symptoms, most often a small round lesion without hair. The lesion will often have scaly skin in the center and sometimes small abscesses appear in the lesion. The lesion may start as a small spot and continue to grow in size and it may or may not be irritated and itchy. The lesions are most common on the head but can also occur on a dog’s legs, feet, or tail.

The best and most accurate way to identify a ringworm infection is by collecting scales and crust from the dog’s skin and coat and have them cultured by a veterinarian.

Most small, isolated lesions on healthy dogs and puppies will heal on their own within 4 months. In more severe cases, several different treatments are used. Isolated lesions can be treated with an antifungal medication such as miconazole cream, Lotrimin cream, or 1% chlorhexidine ointment which need to be applied to the infected areas twice a day. More severe lesions need to be treated with antifungal shampoos such as 0.5% chlorhexidine shampoo, ketoconazole shampoo, 2% chlorhexidine solution, or 2% miconazole shampoo applied every two to four days.

There are currently no dependable vaccines to prevent ringworm infection in dogs.