Obesity in dogs is almost as common as obesity in humans. This may surprise you but it is in fact, true. Experts believe between 25% and 40% of all pet dogs are obese or in the early stages of becoming obese. 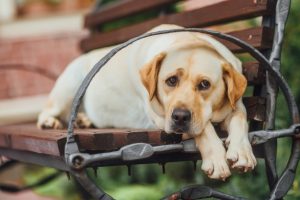 The health consequences of obesity in pet dogs should be a serious concern to every dog owner. Overweight dogs suffer from more stress placed on their hearts, lungs, livers, and kidneys. They also are at higher risk should they have an accident or develop a disease requiring surgery. Larger breeds are more prone to injury if they are obese or even if just overweight. Obese and overweight dogs don’t have the energy that they would normally have.

The causes of obesity in dogs generally can be traced to too much food and not enough exercise. Overeating for a dog is usually due to an owner feeding too large a portion at mealtimes. When you add snacks to a dog’s diet, it’s easy to see how a dog can gain extra weight quickly. Sometimes an owner mistakenly believes that their dog needs access to food 24 hours a day. It’s also a common misconception that dogs will only beg for more food when they’re hungry. This is definitely not true. Dogs are natural born food-beggars, just like my Golden Retriever. I am convinced that if he could open my refrigerator door with his paws, I’d come home to find the refrigerator and the freezer empty! And if your dog is anything like mine, he’s learned that looking at me in certain ways will always result in more food or snacks. A dog will ask for more food or snacks over and over, whether he’s hungry or not. If your dog is overeating even a little, he will slowly but steadily put on weight which leads to obesity in middle age.

Lack of exercise is also a significant contributor to obesity in a pet dog. As humans, we have the same problem. If you limit your dog’s play area to the indoors or your yard, he won’t get the exercise he needs and a dog is not going to exercise on his own. If you think an overweight or obese dog is not as lazy as we are when it comes to exercise, you’re wrong.

There are other reasons that a pet dog can gain weight. If your dog has been spayed or neutered, their metabolism will be lowered. It’s not that common for dogs to gain a lot of weight after having one of these procedures, but if the amount of food a dog eats and his exercise patterns don’t change, what was fine for an active puppy will lead to a noticeable weight gain in a spayed or neutered middle-aged dog.

Disorders such as an underactive thyroid gland or hyperthyroidism can also cause weight gain. It’s also possible that a dog’s adrenal glands may produce too much of the hormone Cortisol and create an ailment known as Cushing’s Disease. Dogs with Cushing’s Disease don’t actually gain weight, but any extra fat is deposited in their abdomen and they end up potbellied.

If your pet dog is overweight or obese, suffers from hip dysplasia or arthritis, and has mobility problems caused both by weight and disease, he needs Winston’s Joint System formula. an all-natural formula developed by a Naturopathic Doctor to heal his own beloved dog. For over 20 years, this long-proven formula has been giving relief from pain and stiffness to all breeds and ages of dogs. Owners report that their pets have a new-found vitality and alertness once they are free of pain.

There are easy ways to tell if your dog is overweight. First, check his ribs. You should be able to feel a little fat over his ribs, but if you can’t feel his ribs at all, he’s way too fat. Also check around his shoulders, hips and legs to see if he has too much padding. Look your dog over while standing above him. This is a good perspective for determining obesity. Does your dog look trim or does he lack any defining shape at all?

When the vet told me my dog was putting on too much weight I knew it was my fault for being too generous with the snacks. My dog loves his treats, and even though I’m careful to buy only the healthy ones and not those that are basically just corn or wheat filler, he still was gaining too much weight. He also developed a nasty little habit of aromatically bombing the house with his flatulence. I was happy when I found a good cure for both his obesity and his unpleasant aromas. Winston’s Digest All worked wonders when it came to stopping him from perfuming my house and it helped him lose weight in just a couple months. Winston’s Digest All helps with gas, bloating, flatulence, weight loss, and digestive problems. It’s a little product that does a big job.