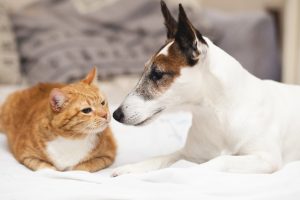 If you adopt a cat and dog at the same time when they are young, they can easily adapt to living together and even become good friends, or at the very worst, learn to tolerate each other.

Each pet will need its own space in order to feel comfortable and safe. You’ll also need to be sure each pet is fed enough food or one of them will attempt to steal the other’s food.

If you have a dog or a cat that’s used to being the only animal in the house, adopting a new pet is not always an agreeable event for the pet who has established your house as their sole domain You’ll need to make sure you introduce the new pet gradually so there won’t be fights and the pets will be able to adjust to one another.

When you bring a new pet into your house, you should keep it isolated from the other for a short period of time, allowing it to interact with your existing pet for just a few minutes each day until you are convinced that there will be no problems between them; or if there is, the problems will be minor.

As the pets become better acquainted you can increase the length of time they spend together. This will allow both pets to feel more comfortable. The old pet won’t feel threatened by the new one and the new pet won’t tend to be aggressive toward the other in an attempt to establish its territory.

Dogs are usually more likely to accept a new cat. However, some cats may never accept a new dog and will always be hostile towards it.