Many people who have lost a beloved pet often wonder if dogs go to Heaven? We believe they do, whether they behaved badly or were wonderful, loving dogs during their entire lives. The bond between an owner and his dog can never be broken as you’ll see in the story that follows. 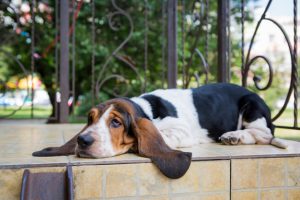 An old man and his pet dog were walking down a dusty, winding road lined with fences bordering the sides. About a mile into their walk they came upon a white painted wooden picket gate which led into a peaceful meadow awash with flowers of all hues. A big sign prominently posted by the gate stated, “No Trespassing Allowed”.

The old man looked around the low-lying, flat meadow and saw no one nor any buildings for miles around. He said to the dog, “I don’t see what harm there could be in the both of us taking a short stroll through this beautiful meadow. Let’s enjoy this delightful sunshiny day with a walk among the flowers.”

The dog eagerly shook his head in agreement and so off they strolled, crisscrossing the meadow and basking in the picturesque scenery. The old man spotted a small stream in the distance where his dog could have a drink of water and they could both cool off. After the dog had enjoyed a short romp in the stream they started walking back toward the road where they had first entered the meadow.

Something seemed different about the meadow now; they’d only been walking for a short time and it was still early afternoon, but the entire meadow had swiftly taken on a radiant golden cast. The flowers appeared more abundant and luminous than before and the air was thick with a soft hazy glow. The old man and his dog were unable to see five feet ahead of them and the old man said, “I think we’d better stop right here for a minute or two until this fog lifts. I can’t see anything, and we sure don’t want to get lost in this soup.”

Just as quickly as the fog had appeared, it lifted, and the old man and his dog found themselves standing directly in front of a large wrought iron gate made of pure gold. Sunshine gleaming off the gate gave it a dazzling luster, brighter than anything the old man had ever seen in his entire life. The dog was a little frightened and began to tremble slightly, since he too had never witnessed anything like this apparition that appeared before them. Within moments there materialized a man in white robes standing before them. “Welcome to Heaven” he said.

The old man’s eyes twinkled and his face lit up like a shining lamp. He clapped his hands and said, “Oh, how I had hoped for this all my life.” He was filled with joy, and looking at his faithful companion he said, “Cody, let’s go. This is HEAVEN!” He started off though the gate, his dog following, vigorously wagging its tail, happy for the old man, even though he himself had no idea what “heaven” was.

The gatekeeper abruptly stopped him. “Sir, dogs are not allowed in Heaven. I’m sorry but he can’t come with you.”

“What kind of Heaven won’t allow dogs?”, the old man shot back. “If he can’t come in, then neither will I. I’ll just stay out here with him. He’s been my faithful companion all his life, and I’m not going to abandon him now.”

“Suit yourself”, said the man in the robes. “But I warn you, the Devil lives on the other side of that winding road and he’ll try to sweet talk you into coming over to his side. He’ll promise you anything, but beware, your dog can’t go over there either. If you won’t leave your dog, you’ll have no choice but to spend eternity walking up and down that road.”

The old man snorted in disgust and signaled to his dog. Off they trotted towards the painted wooden gate that had led them into the meadow.

After walking some distance on the dusty old road, they came to a rundown fence with a hole in it. There was no gate leading into the big, grassy field that lay just beyond the fence, only the hole. Inside the field stood a man dressed in black, stirring up the ground with an broken hoe.

“Excuse me, Sir”, said the old man. “My dog and I are getting awfully tired. Would you mind if we came in and sat in the shade of your big apple tree for a little while?”

“Not at all”, said the man in black. “There’s cold water under that tree over there. Make yourselves comfortable.”

“Is it okay for my dog to come in too? The man down the road said dogs weren’t allowed in here either.”

“Would you come in if you had to leave your dog outside?”

“Oh, no Sir, that’s why I didn’t go into Heaven. I was told my dog couldn’t go in, so I guess the two of us will be spending eternity on this road. But right now some cold water and shade would be so good for the both of us. But, I won’t come in if my faithful companion here can’t come too. And that’s final.”

The man in black smiled benevolently and said “Welcome to Heaven.”

“That was the Devil, and he gets all the people who are willing to give up a life-long companion in exchange for a comfortable place to stay. They soon find out the mistake they have made, but by then it’s too late.”

“Now GOD wouldn’t allow dogs to be banned from Heaven, would he. After all, HE created them to be man’s best companion in life. Why would he separate them from each other in death?”

The old man grinned from ear to ear and said, “You are absolutely right! This is the place for us and I am now really, really happy to be here!”. Then he and his dog Cody, trotted side by side into Heaven and were happy together for eternity.