Female dogs in heat go through different cycles or phases that vary in length. A dog will usually go into heat when she reaches puberty, but the onset of puberty and the length of the heat cycle depends on the breed and size of the dog. 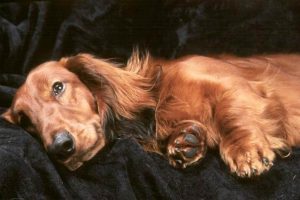 A female dog’s heat cycle generally occurs twice a year, between January and March and again between August and October.

There are four phases a female dog in heat goes through, and the length of these phases can vary between dogs.

The cycles or phases a female dog in heat goes through are:

Proestrus, a 10-day period where she has spotting or bleeding from her vaginal area;

Estrus which lasts for five to nine days. At this stage the dog is ovulating and will accept a male dog as a mate;

Diestrus lasts for six to ten weeks. During this time many hormonal changes take place and her uterine walls will thicken;

The last stage, Anestrus usually lasts for 15 weeks. The female dog won’t have any hormonal activity, produce milk or possess any interest in mating with male dogs.

To determine if your female dog is in heat, watch for these signs: a swelling and enlargement of the vulva and vagina; any vaginal discharge that begins as a pink liquid and progresses to a bloodier fluid; the marking of her scent by leaving small amounts of urine; a preponderance of male dogs trying to get near her.

If you don’t want your female dog to be in heat you need to have her spayed. A spayed dog will not show signs of estrus.

If you want your dog to mate, she can become pregnant during the estrus stage. An owner may have trouble distinguishing between the proestrus and estrus cycles and it can be challenging to determine which stage of the cycle the dog is at just by watching her behavior.

Female dogs don’t experience menopause and will go through heat during their entire lifetime; however, the length of time between heat episodes will increase as she ages.