Dominant dog behavior usually develops over a period of time. Dominant dogs will often growl or bark at their owners when the dog’s demands aren’t being met. 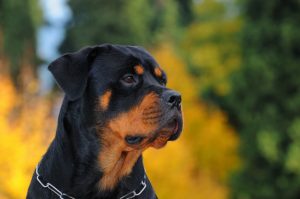 If there are two or more dogs living in the same household, the dominant dog will be considered by the other dogs as the alpha dog, or leader of the pack. Such dominating dogs often try to gain leadership over their owners also.

To prevent this type of unwanted behavior you must learn how to recognize dominant dog behaviors and take steps to change those behaviors if you want to have an obedient and loving companion rather than a terrorizing monster running around your house.

Some of the symptoms of dominant behavior in dogs are similar to the symptoms of separation anxiety so it is important to distinguish between the two. To determine if your dog is really showing signs of dominating behavior you’ll have to find a way to monitor its behavior to see if it behaves in a dominating manner around other dogs or only when left alone.

If you notice any of the following symptoms of dominating dog behavior you may want to seek the assistance of a professional trainer who can train your dog to be more obedient. If you find that your dog’s disobedience and dominant behavior is resulting in biting and aggression, most trainers won’t work with your dog.

Some of the signs of dominant dogs are:
Always acting stubborn, barking loudly, consistently ignoring your commands, pushing ahead of you whenever you open a door in the house or to the outside, resistance to being walked with a leash, growling and barking when it doesn’t get its way or when corrected for doing something wrong.

It isn’t easy dealing with dominant dogs. If your dog disobeys you and growls at you when you try to correct it, don’t shout or express frustration. You have to remain calm and speak to it in a firm commanding tone.

Although it can be a daunting and challenging task to permanently change the behavior of a dominant dog, it is possible to successfully change your pet’s behavior if you remain calm and persistent at all times during any training sessions.