Canine epilepsy is a serious condition that causes seizures in dogs. Once the disease is diagnosed, epilepsy becomes manageable. Epileptic seizures are dangerous for a dog as it can easily be injured and fall into unconsciousness with no control over its muscles. 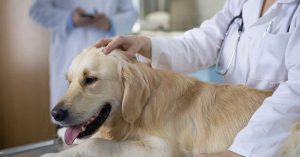 Recognizing canine epilepsy symptoms will help you treat the ailment in its early stages by getting the proper medication from your veterinarian and knowing how to keep your dog safe the next time it has a seizure.

Canine epilepsy becomes apparent when your dog has seizures that occur suddenly and without any warning signs.

Seizures can be triggered by something as simple as loud noise, bright lights, or a stressful situation.

When a dog has a seizure, it may fall down, stagger and have spasms. The dog may or may not lose consciousness, but either way it will have no control over its muscles and limbs. The dog will be breathing with great difficulty and will salivate excessively. There may be foaming around its mouth due to its fast breathing.

Most canine epilepsy seizures last less than a minute, although it’s not that unusual for one to last for 5 or 6 minutes. Apart from seizures there are no other symptoms of canine epilepsy.

Epilepsy may be caused by a genetic disease, tumors, blood clots in the dog’s brain, or damaged brain tissue caused by a previous injury. Seizures can also be caused by a heat stroke, poisoning, a calcium deficiency, or low blood sugar level.

If your dog has a seizure, wait until it completely calms down and then let it rest for a while.

If your dog’s epileptic seizures only happen once or twice a year, medication is usually not recommended because of the somewhat severe side effects. If your dog has seizures on a regular basis, an anti-epilepsy drug should be prescribed by a vet.

Canine epilepsy is a rare but extremely severe disease and I sincerely hope it never happens to your pet.