When a dog vomits blood it is suffering from a condition known as hematemesis. Hematemesis could be a temporary condition or a sign of chronic gastrointestinal illness. 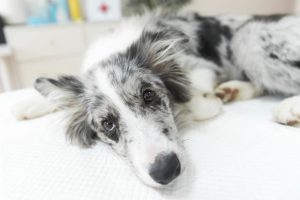 Some symptoms that may accompany a dog’s vomiting of blood include: rapid weight loss, bloating, excessive thirst (this can also be a symptom of diabetes in a dog), or darkened stools.

There are some acute illnesses a vet will need to test for and exclude before the possibility of a chronic condition can be diagnosed. These include poisoning of the animal, swallowing of a foreign object, parasites in the gastrointestinal tract, or bad reactions to prescribed medications.

There are some serious chronic gastrointestinal illnesses and diseases than can also cause a dog to vomit blood, including kidney disease, tumors, bowel obstructions, or liver disease.

When a dog vomits blood, it should be considered just as serious as if it were a human vomiting blood. A responsible pet owner will call their vet for an emergency visit should their dog begin vomiting blood.

Don’t take a chance that it’s nothing serious or that the problem will go away on its own. Your pet deserves better treatment than that.