If you’re concerned that your pet dog may be sleeping too much and there might be something wrong with it, you’ll first need to determine whether it really is sleeping more than what’s normal for its age and activity level. 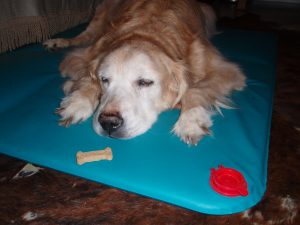 Why dogs sleep so much

Why dogs sleep so much is a common question new dog owners often ask their friends who’ve had dogs for some time.

Dogs sleep more than humans do, but they also wake up more frequently than we do. How much they sleep depends a lot upon their level of activity.

A dog living in a home as a pet will sleep more than a dog that works for a living – like a search and rescue dog, or a dog working on a ranch or farm. Dogs are able to adjust their sleep pattern so that they can be awake when there’s something to do, and can easily sleep the rest of the time.

Many indoor dogs will sometimes sleep out of simple boredom. If you suspect your dog is bored, you can give it ample stimulation during the day by giving it lots of toys to play with or take it on several walks. If your dog has enough to do during the day, it will usually stay awake during the day and then sleep at night when you do.

Dogs have the same sleep patterns as humans.

When your dog first goes to sleep, it enters the slow wave or quiet phase of sleep. It will lie quite still and is oblivious to its surroundings. The breathing slows, the blood pressure and body temperature drop, and the heart rate decreases.

After about ten minutes, your dog enters the rapid eye movement (REM) or active stage of sleep. Its eyes will roll under its closed lids, and it may bark or whine or jerk its legs. During this stage, the brain activity is similar to that seen during the dreaming phase of human sleep, and many vets and pet owners agree that this is evidence that dogs have dreams.

Larger dogs sleep so much more than smaller ones who generally have a tendency to always be alert for anything that allows them to start a round of loud and seemingly uncontrollable barking.

Older senior dogs always sleep more than younger dogs, and 20 hours or more a day of sleeping does not mean an old dog is ill; they’re just tired out.

Medical conditions causing dogs to sleep too much

Although all dogs begin to slow down and rest more as they grow older, there are some medical conditions that may cause your dog to sleep too much.

• Many veterinarians believe that dogs can get depressed just as humans can. Canine depression can be the result of a chemical imbalance in the brain but more often is caused by a sudden change in the dog’s routine, such as moving to a new home, being adopted, or losing a long-time companion – human or animal. The primary symptoms of canine depression are an increased amount of time spent sleeping, decreased activity, lethargy, decreased appetite and weight loss.

• When a dog has hypothyroidism, the thyroid gland doesn’t produce enough T3 and T4 hormones, causing a decrease in metabolic function. Most of the time this is an autoimmune response that attacks the thyroid, but it can also be caused by other conditions, such as cancer. The decrease in metabolic function causes the whole body to slow down resulting in excess sleepiness and lethargy. Other symptoms may include weight gain, anemia, hair loss, skin and coat disorders, decreased heart rate, and an intolerance to cold weather.

• Juvenile-onset diabetes occurs infrequently in dogs and principally affects older dogs, particularly females. Dogs who have diabetes display symptoms including sleepiness, lethargy, increased thirst, frequent urination, weight loss, and occasional blindness. Treatment is the same as for humans with diabetes: insulin injections. Some breeds such as schnauzers, small terriers, and poodles are at increased risk for diabetes, as are obese dogs.

There is an excellent chance we can help your dog, so please contact us or call our toll free number at 888-901-5557.