Dogs digestion problems like bloating and flatulence can be very uncomfortable for a dog and cause intestinal pain. And when a dog passes gas, it’s not very pleasant for anyone standing nearby. 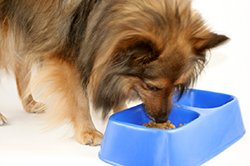 Bloating occurs when a dog’s stomach becomes dilated, sometimes resulting in the twisting or turning of the stomach. Flatulence is caused by the accumulation of gas in the dog’s gastrointestinal tract. If the accumulated gas is persistent or excessive, it can cause considerable discomfort to a dog.

Bloating is very common in large dogs like Dobermans, German Shepherds, and Great Danes who have big chests, and is caused by the accumulation of gas and fluid in their stomachs. When their stomach becomes engorged it can block veins in the abdomen, resulting in abnormally low blood pressure which can lead to shock. If the dog’s bloating is also accompanied by enlargement of the stomach, it becomes a much more serious problem because air, food and water can be trapped in the stomach and result in death. Any dog who displays symptoms of a bloated stomach and is obviously in great pain should be given immediate medical help.

Dogs that gobble up their food very fast are more likely to suffer from bloating; older dogs and male dogs are more prone to bloating than younger dogs.

When these symptoms persist and don’t disappear within 15-20 minutes, the problem constitutes an emergency and the dog must be taken to the vet. If the problem is diagnosed as bloating, the air in the stomach will be removed using a stomach tube. If the dog’s stomach is twisted or turned, it may be necessary for the vet to perform a surgical procedure to reposition the stomach and be sure there is no damage to the dog’s stomach and nearby organs.

Flatulence presents another problem but not so serious as bloating. Dogs of all ages and breeds can suffer from flatulence, and almost every case is caused by the dog’s eating habits. Some dogs chow down their food really fast and inadvertently take in too much air while eating. The result is flatulence.

Symptoms of flatulence in dogs include the following:
* Passing Gas
* Bloating
* Loud belching
* Abdominal pain in the dogs abdomen

You can prevent your dog from passing gas by keeping it from gulping down its food. Feed your dog smaller meals every few hours rather than two large meals. Be sure your dog has plenty of fresh water when eating and at all other times.