Dogs enjoy chewing on lots of things, including their own paws at times. But why do dogs chew their paws? 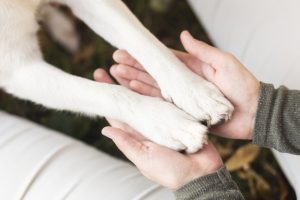 If a dog has an emotional problem like separation anxiety, it may chew on its paws. Stress is also one of the major causes of why dogs chew their paws and this stress can be triggered by a past event or a continuing irritant in a dog’s environment.

Some of the most common reasons for a dog to be stressed are listed below:
(1) A new person arrives in the family, like a newborn baby, and the dog is frequently ignored;
(2) A new pet is brought into the household;
(3) Abusive behavior by the current dog owner or by a previous owner;
(4) Separation from its owner or abandonment (this can result in separation anxiety and cause a dog to chew on its paws and skin);
(5) A serious lack of affection from the dog’s owners.

There are other factors that can trigger severe stress in a dog and cause it to chew on its paws; but whatever the cause, it’s important to identify it and work to change that motivation as quickly as possible. Once the dog feels comfortable and safe, the chewing on its paws should end.

It’s also possible and quite likely, that dogs who are bored or dogs with too much energy will find a way to occupy their time, and that usually results in destructive behavior, of which chewing their paws is just one example. You can help change this unwanted behavior by making sure your dog gets plenty of exercise and attention.

Chewing the paws can also be a reaction to a skin infection caused by a virus, bacteria or fungi. The dog will try to soothe the itching by licking and chewing at its skin. A vet can prescribe antibiotics to eliminate the skin infection and once the dog has healthy skin again it will usually stop chewing its paws.

An allergic reaction also causes dogs to chew their paws. These allergies could be caused by food or something the dog has inhaled. Antihistamines or steroid creams will ease the itchiness, but you’ll need to determine what the dog is allergic to and eliminate the dog’s access to that product or thing causing the adverse reaction.