The list of vaccines to prevent common dog viruses contains only seven vaccines. Each of these vaccines can be used to protect against one or more viruses that can affect a dog. 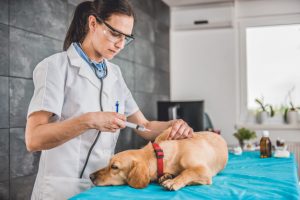 Vaccines contain a viral or bacterial agent that is added to a liquid and then given to a dog through ingestion, inhalation or injection. This causes a dog’s immune system to create antibodies to a specific illness and will protect the dog from infection if exposed to that virus.

1. Monovalent Vaccines
Monovalent vaccines provide protection for one disease at a time. An example of this is the Rabies vaccine. This vaccine contains only the rabies viral agent added to the liquid.

2. Multivalent Vaccines
Multivalent vaccines contain several bacterial or viral agents that have been added to the liquid the dog will ingest. As many as 8 or 9 disease agents can be combined into one Multivalent vaccine. A common vaccine called Duramune is known as a “core vaccine” and protects against four of the most common dog viruses.

3. Recombinant Vaccines
Certain antigens on infectious organisms stimulate a greater antibody response in a dog. In a Recombinant vaccine the genes of the virus are fragmented into separate parts and the parts that will produce the best immune response are isolated and used in the vaccine.

5. Modified Live Vaccines (MLV)
In Modified Live Vaccines, live virus particles are altered in a laboratory to keep the virus alive but kill its ability to produce the disease. When introduced to the dog’s body, the viral agents reproduce and trigger an immune response without causing an outbreak of the infection. MLV vaccines stimulate a dog’s antibodies more quickly and in larger amounts.

6. Killed Vaccines
In a Killed vaccine, the actual viruses or bacteria are killed and then placed in a liquid solution. The viruses or bacteria are then not able to multiply within a dog’s body. More of the virus or bacteria particles are introduced in an attempt to trigger an immune response. There is one disadvantage to this type of vaccine and that is it can put a dog at an increased risk of developing an allergic response.

7. Intranasal Vaccines
Intranasal vaccines are designed to protect against diseases of a dog’s respiratory system. They are processed into a liquid to squirt or drop into a dog’s nose. The vaccine is transmitted directly into the dog’s bloodstream and provides protection more quickly than an injectable vaccine can.

It is important that you consult your veterinarian to determine which vaccines are appropriate for your pet and when they should be administered.

Whether you have a new puppy to care for or an older dog that needs regular shots, dog vaccination costs are an important consideration in today’s economy. Vaccinations are essential to preventing a wide array of health problems, diseases and other harmful or fatal conditions that can affect a dog. 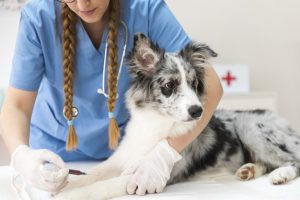 Veterinarians usually recommend beginning vaccinations for a puppy when it’s just a few weeks old, and some vaccinations have to be renewed every so often in order for them to be effective.

Vaccinations are commonly given against several different diseases, including distemper, parvovirus, and rabies. Your dog’s vaccination schedule will depend on factors such as where you live and your dog’s exposure to other dogs or animals.

Parvovirus is contagious and often fatal for most puppies. But if your puppy or dog doesn’t come into contact with other dogs, this vaccine may not be needed.

The best way to determine a dog’s vaccination costs long-term is to research the types of vaccinations that are vital to your dog’s health based on its age, breed, gender and where you live.

Most dog vaccinations cost around $20 each; additional booster shots add to the total costs. You also have to figure in the cost of a visit for the vet to administer the vaccines. You’ll probably be charged an additional $40 to $50 for the vet’s office visit.

Dog vaccination costs often vary considerably depending on what part of the country you live in and whether you live in an urban or suburban area rather than rural.

If you do not already have a regular veterinarian it would be wise to call different veterinarian’s offices and ask what the charges will be for an office visit and the dog vaccinations your pet requires.