Dog saliva is often used by canines to help heal their wounds. A dog will instinctively lick its wounds in an attempt to relieve pain. The dog’s saliva forms a film on top of the wound, numbing the area and reducing the pain. 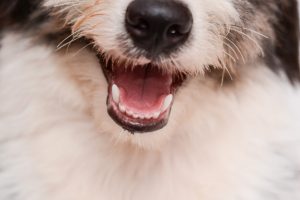 Dog saliva is believed to contain antibacterial microorganisms, enzymes and antibodies that can speed up the recovery of a dog’s wounds. It’s also thought to be effective in helping a dog fight bacteria such as staphylococcus, streptococcus canis, or E. coli.

One dog saliva myth is that it’s beneficial both for dog wounds and human wounds. There is a bit of truth in this belief, but putting dog saliva on a human wound can result in any number of problems. The bacteria in the saliva may infect a human’s skin and prove to be harmful for the human.

When a dog excessively licks its wounds, it’s not always good for the dog either as it can lead to the formation of acral lick granulomas and patches of hair loss. Also, the dog may develop an obsessive-compulsive behavior of licking, chewing and biting the wound. Some vets believe that when a dog licks its wounds too much it destroys all the benefits canine saliva has on the wounds.

Another dog saliva myth that has been proven wrong is that dogs will pass on their illnesses to you through their saliva. Most of the bacteria in a dog’s saliva is specific to canines and won’t harm humans.

Some other myths and facts about dog saliva include the belief that since dog saliva contains a special enzyme to promote healing of a dog’s wounds, it will have the same effect on human’s cuts. The fact is that enzymes in a dog’s saliva will only work on the wounds of dogs. Allowing your dog to lick your cuts doesn’t mean the cuts will heal faster and it could lead to infection from any germs the dog may have in its mouth.

Another dog saliva fact and a potential health risk from having a wound licked by your dog, is the transmission of roundworms. These intestinal parasites are commonly found in kittens and puppies and are passed through licking of a wound. The symptoms of roundworm are coughing, fever and headaches. Hopefully your dog has been given deworming medication in the past and has subsequently been tested on a regular basis. If this is true, your risk of contracting roundworm is slim.

Hopefully this little tidbit of information about dog saliva myths and facts will spur you to do a little research on your own, even if it’s simply asking your vet for his or her opinion.