Some common infections in dogs can result in minimal problems for the health of the animal, but infections can also cause major illnesses that can be fatal. As a responsible pet owner you should be aware of these common infections and their symptoms in order to determine whether your dog is having a bout with an illness that will cure itself, or whether the symptoms are indicative of a serious disease. Early recognition and treatment of infections are your best protection against a severe illness or the death of your pet. 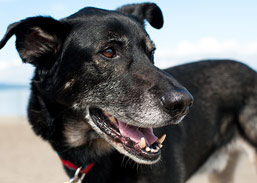 Rabies is one of the most common infections in dogs. The symptoms of rabies may not become noticeable for days or even months after a dog has been infected with the disease. The symptoms include refusing to eat or drink water, a high fever, seizures, and foaming at the mouth. Some dogs will exhibit what is called “mad dog syndrome.” A dog with this syndrome can become extremely aggressive and will attack humans or other dogs. Vaccination is not only your safest protection against a dog contracting rabies, but also is mandatory in almost every city and town in the U.S.

Parvovirus is another extremely contagious disease commonly found in dogs, and also requires vaccination with a follow-up shot every year. It is usually contracted through exposure to the infected feces of a dog or other animal. The symptoms of parvovirus include lethargy, vomiting blood, or diarrhea and loss of appetite.

Ear infections in dogs are more common in floppy eared dogs and dogs who spend most of their time outdoors. The symptoms include excess wax build up in the ear canals, a foul smelling odor from the dog’s ears, and pawing or scratching the ears. Ear infections can be treated with a drying cream from a pet store. Insert the cream into the dog’s ear and rub it in well. The cream will act as a drying agent and soak up the excess moisture in the dog’s ears. Serious ear infections require treatment by a veterinarian.

Distemper is a highly contagious infection that affects the respiratory, nervous and gastrointestinal systems in a dog. Like parvovirus, the infection is transmitted when an animal is exposed to feces that contain the virus. All dogs are at risk of contracting distemper, but puppies under four months of age are especially at risk. There is no cure for distemper but there are medications to help control the disease and keep it from worsening. Distemper vaccinations are also required annually for puppies and dogs.

The common cold in dogs is most commonly caused by kennel cough when an upper respiratory infection affects a dog’s lungs and sinuses. The symptoms include nasal discharge and sneezing, continual coughing spells, and great difficulty in breathing. Dogs who have strong immune systems are usually able fight off the infection before it becomes serious. Kennel cough is extremely infectious but can be treated and eradicated if caught in the early stage.