The question “Should dogs eat cat food?” is often asked by owners who have both dogs and cats living together because it’s often difficult to keep a dog from eating the cat’s food. 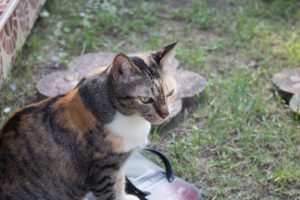 Cat food usually has higher levels of protein and fat than dog food and many dogs find that combination very appetizing. Cat food is also more likely to be left out all day long allowing a cat to eat when it wants, whereas dog food tends to be served only at mealtimes. Dogs have a tendency to eat whatever they find tasty, regardless of whether they’re hungry or not.

Cat food and dog food have different formulations because cats and dogs have different nutritional requirements. Cats are carnivores and must eat meat in order to maintain their health. Dogs eat cat food because they are omnivores, meaning they eat both meat-based foods and plant-based foods. Cats usually don’t bother eating a dog’s food because cats need certain B-complex vitamins that dog food doesn’t contain.

Will your dog get sick if it eats cat food? Usually only if it overindulges on cat food. If this happens the dog is likely to suffer digestive discomfort, including diarrhea and vomiting due to higher fat levels in cat food.

If your dog sneaks an occasional small amount of cat food it won’t harm its health, but if allowed to eat cat food over an extended period of time, it will probably become overweight and will lack some of the vital nutrients in dog food that are lacking in cat food.

Over time, a dog could also develop kidney problems if its excretory system is unable to remove the extra protein found in cat food. This extra protein becomes urea which is a nitrogenous compound found in the urine of an animal and is produced by the breakdown of protein.

Keeping your dog out of the cat’s food requires some rearranging. Try putting the dog and cat food bowls in different parts of the house. You could put the dog’s food in the kitchen and the cat’s food in the laundry room. If that doesn’t work, try giving the cat its food on something higher than you feed the dog on, like a countertop which cats will find easy to climb up on but a dog won’t.

Hopefully one of those tricks will work. If not you may want to install a cat door on the laundry room door that’s too small for your dog to get through. Dogs eat cat food simply because it’s food and it’s accessible. If a dog can’t get to it, the problem will end.