If lately you’ve been noticing that your older dog is exhibiting ‘behavior problems’ , your pet may be developing a syndrome called ‘Canine Cognitive Dysfunction’ (CCD) or ‘Cognitive Dysfunction Syndrome’ (CDS). This dysfunction or syndrome affects older dogs the same way that Alzheimer’s disease affects humans. Recent medical studies have revealed that many older dogs with behavior problems have lesions in their brains similar to those that are seen in Alzheimer’s patients. 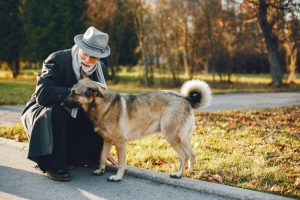 According to Pfizer Pharmaceutical, 62% of dogs who are 10 years of age and older will experience at least some of the following symptoms, which could indicate Canine Cognitive Dysfunction:

* Confusion or disorientation: your dog may get lost in his own back yard, or wander aimlessly in the house and become trapped in corners or behind furniture
* Decreased level of activity
* A decrease in attentiveness or long periods of just staring into space
* Doesn’t seem to recognize family members or old friends
* Pacing during the night, or a change in sleeping patterns, including inability to sleep at night
* Loss of house-trained faculties. A previously house trained dog may begin forgetting to let you know he has to go outside and may urinate or defecate inside the house when he would not have done so before.

Other signs of cognitive dysfunction may include:
* Anxiety and increased irritability
* An increase in barking or howling
* Lethargy or boredom
* Decreased ability to perform certain tasks or respond to commands.

To make a diagnosis of Canine Cognitive Dysfunction, your vet will have to first rule out any other possible causes of your dog’s behavior problems. For example, decreased activity may not be caused by Cognitive Canine Disorder but may be due to an advancing arthritic condition or hip dysplasia which can be successfully treated with Winston’s Joint System.

If your veterinarian determines that your older dog is suffering from Canine Cognitive Dysfunction, a treatment for this disorder will probably be recommended. The drugs Selegiline and Anipryl, although not a cure, can alleviate some of the symptoms of Canine Cognitive Dysfunction in older dogs. If your dog responds to either of these drugs, it will need to be treated daily for the rest of its life. As with all medications, there are side effects. It is important that you ask your vet about any possible side effects before deciding on treatment with these drugs.

It is also important that older dogs with Canine Cognitive Dysfunction continue to receive regular exercise and play. If your older dog is experiencing behavior problems, talk to your veterinarian about ways to help your dog have a more happy and healthy life in his senior years.