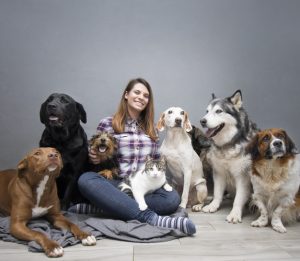 Twas the night before Christmas at the animal shelter,
The dogs were asleep, tired from their helter-skelter.

Their stockings were hung from the cages with care,
In hopes that Santa Claus would find them all there.

The dogs were all snoring and snug in their beds,
While visions of doggy treats danced in their heads.

The ground outside sparkled with a blanket of snow,
Lit by pale moonlight, it cast a picturesque glow.

Suddenly on the lawn there arose such a clatter,
The dogs jumped from their beds to see what was the matter.

The windows were huge and the light shone so bright,
That what the dogs saw, gave them all a great fright.

As if in a trance, they peered through the panes,
And saw a miniature sleigh pulled by eight Great Danes.

A big shaggy Sheepdog was seated in a giant red sleigh,
Busy smacking his lips and barking “I’m in a hurry today!”.

Tall, proud and sturdy, the Great Danes looked the same,
Then Santa whistled and shouted, and called them by name.

“Now, Dudley! Now, Dylan! Now, Pepper and Dexter!
On, Corky! On Chipper! On, Dallas and Baxter!

Over the house-top the Great Danes they flew,
With the sleigh full of treats, and St. Nicholas too.

With a loud crash the sleigh hit the roof of a shed,
Missing by yards the shelter’s roof overhead.

As they squealed with concern and ran all around,
Down the chimney came Santa with a leap and a bound.

His fur was all shaggy, white and gray head to foot,
And his paws were all tarnished with ashes and soot.

A bundle of doggy treats he had flung on his back,
And he looked like a peddler just opening his pack.

His eyes — how they twinkled! His ears flopped like jello!
He acted so happy and was such a great fellow.

His teeth looked so big each time he would smile,
And his grin was so huge it stretched for a mile.

He had a broad face and a great big round belly,
That shook when he laughed like a bowlful of jelly.

He was chubby and plump, a right jolly old soul,
He was perfectly suited for this honorable role.

When he stared at his audience and shook his head,
The dogs obeyed and headed silently back to bed.

He spoke not a word, just did his work with stealth,
And filled all the stockings with treats from Dogshealth.

Then placing one paw on the side of his nose,
He gave a quick nod and up the chimney he rose.

He jumped in his sleigh, to his team gave a whistle,
And away they all flew like the down of a thistle.

But I heard him exclaim, as he drove out of sight,
“Happy Christmas to all dogs, and to all a good-night.”