Have you ever wondered if chocolate can kill a dog or if that’s simply a myth spread by some dog owners?
Some ‘people foods’ are safe to feed your dog as long as you don’t overdo it by giving your pet too much. However, there is one people food you never should give your beloved dog and that is chocolate. Chocolate can seriously sicken your dog and sometimes can even kill it. Veterinarians rate chocolate as one of the most common causes of dog poisoning. 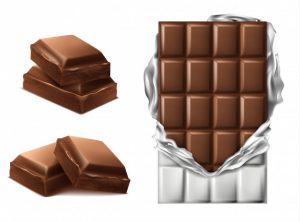 What makes chocolate so poisonous that it can kill a dog? The answer lies in the ingredients used to make chocolate. Cocoa and cocoa beans contain caffeine plus a chemical compound called theobromine, which is the real threat to dogs. According to the Merck Veterinary Manual, one ounce of milk chocolate per pound of a dog’s body weight is potentially deadly. Since an average chocolate bar like Hershey’s milk chocolate weighs one and a half ounces, it would take a fairly large amount to poison a dog. Obviously smaller dogs are at more risk than large ones.

Don’t assume that this means it’s safe to give your dog small amounts of chocolate. You have no way of knowing how much theobromine a given cocoa product contains, and the more of this chemical you feed a dog, the more poisonous it is to your pet. For example, unsweetened Bakers Chocolate contains about 390 milligrams of theobromine per ounce — about 10 times more than milk chocolate and more than twice as much as semi-sweet chocolate. Although white chocolate contains very little theobromine, veterinarians recommend that you do not feed this treat to your dog either.

The reason theobromine is so dangerous to dogs is because it metabolizes more slowly in an animal’s system than it does in humans. Approximately 18 hours after a dog eats chocolate, half of the theobromine it ingested is still in its system.

It’s true that a large enough amount of chocolate can kill a dog but even small amounts can cause vomiting and diarrhea in a dog. If your dog eats a large toxic amount of chocolate it can cause high blood pressure, a rapid heart rate, respiratory failure, tremors, seizures, and even cardiac arrest.

I certainly don’t recommend ever giving your dog chocolate and it’s something I would never allow my pet to eat. But in the event your dog should manage to get its paws on your chocolate stash, you should know that dark chocolate is the supreme dangerous form of this delectable item. Dogs have died from theobromine doses as low as 115 milligrams per two pounds of body weight. This translates to 20 ounces of milk chocolate, or 10 ounces of semi-sweet chocolate, or just 2.25 ounces of baking chocolate, all of which could potentially kill a 22 pound dog.

Now that you know chocolate can kill a dog, never feed your pet any form of chocolate. If your pet does consume chocolate you should contact your vet immediately. If your vet is not available because it’s after business hours, you can call the ASPCA poison control hotline at 888-426-4435. The call is toll-free but there is the possibility you may be charged for an emergency consultation, so don’t call the poison control hotline unless you are sure your dog has eaten a toxic amount of chocolate.