From time to time a friend will ask me if dogs can eat apples without getting sick. One friend called me in a panic on a Saturday morning after her pet Labrador snatched an apple off her kitchen counter and scarfed the whole thing down, including the seeds. 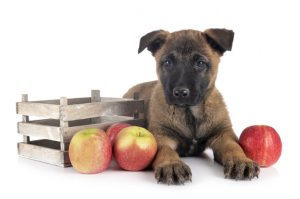 I told her not to worry as an apple is perfectly safe for a dog to eat. You should use caution though if you’re giving your dog whole apples as a treat since the covering of the seeds contains very small amounts of amygdalin, a compound that contains cyanide.

My vet believes that the stems of apples may also contain traces of cyanide, so I’m careful to remove the stem and seeds before giving my dog an apple. Seeds are not really that harmful because the seed coating has to be broken before the amygdalin is released, so if your dog eats the few seeds contained in an average size apple, there is nothing to worry about.

I always slice the apple and give it to my dog piece by piece because it’s safer than tossing him a whole apple to eat. As to how many seeds would be safe for a dog to consume, consider that an adult would need to eat a whole cup of seeds to feel ill.

Apples are tasty treats for dogs and provide the nutritional benefits of vitamin C and fiber, plus they’re low in sodium and saturated fat. They also contain calcium and phosphorus. The omega-3 and omega-6 fatty acids in an apple help make the dog’s skin and coat healthier.

All dogs should not be fed apples just because they contain nutrients. If a dog has kidney disease, the added calcium, phosphorus and omega-6 fatty acids may not be a good addition to its diet. Additionally arthritic dogs require monitoring of their omega-6 fatty acid levels. It’s best to check with your vet if your dog has kidney disease or arthritis.

The worst problems a dog would encounter from eating too many apples is an upset stomach or diarrhea. So when my friend asked me the question can dogs eat apples, I told her yes, but “In the future keep your dog out of the kitchen when you’re making pies.”