How To Manage a Houseful of Dogs

Being a dog owner is a wonderful, fulfilling experience. Just ask any dog parent. But maybe one dog isn’t enough for you and the idea of finding a 24 hour a day playmate/babysitter for your current pet is beginning to pique your interest. 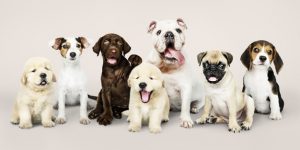 Before embarking on a hunt for a second (or third) dog it’s best if you understand there can be some real challenges to raising more than one dog in your home. And you’re not alone in thinking that life might be better with two dogs. Many pet owners with two, or even several dogs in their home, say that more than one dog in the household makes their life a lot more interesting.

If you’ve definitely decided you want to add another dog as a companion, both to you and your current pet, I offer the following advice: When you’re deciding on which dog will be the new addition to the family, arrange a meeting between your current dog and the new one to be sure the dogs will get along well together. You’ll want them to romp and play with each other and not fight over who’s the “big dog”. If it’s possible, arrange for the dogs to meet each other away from your home. If you’re adopting a dog from a shelter, call and check with the staff to see if it’s okay to bring your current dog with you so you can determine if there’ll be any behavior issues between them.

Let’s assume you don’t own a pet and you’re going to adopt two puppies at the same time. You’ll have to buy two of everything the puppies are going to need; that’s two collars, two leashes, two sets of chew toys and two…well, you get the idea…two of every single thing you buy. You should also buy two separate beds and blankets, because as the puppies begin growing they will want a bed they can call their own.

If you choose to have more than one dog or puppy, each one will have an inbred need to demand your undivided attention at times. The best way to handle that need is to spend one-on-one time with each dog whenever possible. Focusing your attention on playing or training one dog at a time should prevent them from competing with each other when they’re together with you. If you don’t do this your dogs may become dependent on each other for companionship and you could end up being regarded as just the person who feeds them and gives them yummy treats. Remember, your goal when you had the idea of more than one dog in the house, was to provide companionship to you as well as to each other.

Whether they are puppies or adult dogs, they will need individual training sessions in order for the training to reinforce itself in their brains. A good way to handle this is to take only one dog out for a walk at a time, and then take the other one out separately. If you take turns this way your dogs will be able to bond quicker with you and will see you as master of the house and the one they depend on for every need.

You should always feed both dogs at the same time each day. As long as you feed the dogs identical food, and they finish eating about the same time as each other, there shouldn’t be any problems with one dog eating the other one’s food. Each dog will need its own food dish but usually don’t mind sharing a common water bowl.

I know people who are raising as many as six dogs at a time and when one passes away they just go get another one. A friend of mine lives on a 4 acre ranch and has five dogs of different mixed breeds. Those dogs are always happy, running around chasing each other or chasing anything that comes into their sight. If one dog doesn’t want to play when another does, it’s quite easy to find another willing playmate.