How to Diagnose Diabetes in Dogs

Diabetes can severely affect a dog if not detected in its early stages. It’s not always easy to diagnose diabetes in a dog but early detection can improve the quality of the dog’s life, prevent complications, and has been shown in some cases to cure the disease. 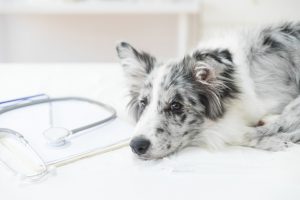 Diabetes is a disease caused by an increased amount of blood sugar that can’t be regulated by the insulin produced by a dog’s body. Diabetes can also result from the pancreas failing to produce enough insulin, thereby making it impossible for a dog’s body to assimilate all the glucose in the blood. The symptoms of the disease are the same for both types of diabetes.

The most challenging thing about canine diabetes is the fact that it may not have any symptoms at all. In some dogs, diabetes may slowly disrupt its bodily functions without showing any discernible signs of disease.

To help in diagnosing diabetes in your dog, watch carefully for any of the following symptoms that are evident for more than a week or two: Lethargy , excessive water consumption, increased urination, an unexplained weight gain or weight loss.

If you suspect that your dog has diabetes, you should have blood and urine tests done by your veterinarian to confirm or rule out diabetes. Diabetes is often discovered during a routine checkup when blood and urine tests are performed by a vet. If the test results show an increased level of glucose in the blood as well as in the urine, it’s a good indication that a dog may have diabetes.

If diabetes is diagnosed in a dog early enough, it may fully recover from the disease; but this usually depends on the age and health condition of a dog. For older dogs, a full recovery generally is not possible.

Full recovery from diabetes may be possible only in the following cases: A younger dog that loses weight and has a complete change of diet, or a dog with diabetes resulting from an abnormal pancreas function if it receives specific treatment for the diabetes.

Even if the condition is not always treatable, regular administration of insulin can often control diabetes in dogs.

Diabetes is regarded as a silent killer, and while a permanent cure for canine diabetes has not been discovered, a dog can often live a normal life with the proper care.