Canine hip dysplasia in Doberman Pinschers is a serious health problem affecting all ages of Dobermans. 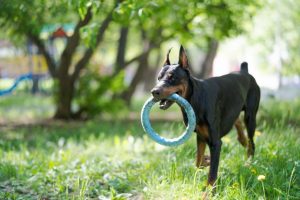 Doberman Pinschers are considered by their owners to be reliable family pets. Dobermans were first bred in Germany to serve as guard dogs. Once known to be a very aggressive breed, the Doberman’s temperament has improved through breeding over the years and is now considered a generally non-aggressive dog.

The Doberman’s powerful, muscular build gives it speed, elegance, strength, and endurance. Its posture is alert and proud, and its gait is fast. Dobermans come in a color range of black, blue, fawn, red, and a light yellowish brown. Above each eye are rust-colored markings which also appear on the muzzle, throat and chest, below the tail, and on all four legs and feet. The Doberman has a smooth, short coat with neat lines and a white patch on its chest.

Dobermans are adventurous and loyal companions. They make talented and obedient students when they are being trained. They are usually sensitive and responsive to an owner’s commands, but they can also be dominating and overbearing. The breed is usually shy with strangers, but become aggressive with strange dogs. Owners who choose a Doberman usually do so for their alertness and ability to protect their owners from possible harm.

Dobermans require mental and physical exercise daily or they can become destructive or frustrated. A walk on a leash, a run in an enclosed area, or a long jog generally satisfies their need for activity. Dobermans are most useful indoors as a guardian and a family companion. Their coats require minimal care which means you don’t have to worry about shedding hair all over the house and the furniture.

The history of Doberman Pinschers is very interesting. A German tax collector named Louis Dobermann is credited for the breeding the first Doberman Pinscher. He was searching for an attentive guard dog to accompany him on his rounds, and in the late 19th century he began to experiment by crossing the German shorthaired shepherd and the German Pinscher.

The original Dobermans had round heads and heavy-boned bodies, but breeders soon began to develop a more robust-looking dog. Over time, the breed evolved and by 1899, the National Dobermann Pinscher Club was created in Germany.

Doberman Pinschers have a lifespan of 10 to 12 years.

Symptoms of hip dysplasia in Doberman Pinschers include moving more slowly, difficulty in getting up or lying down, reluctance to walk, jump or play, refusing to use stairs or get into the car, muscle atrophy, limping, yelping when touched, changes in appetite, and personality changes.

Dobermans who develop hip dysplasia, arthritis or osteochondrosis (OCD), suffer from pain and stiffness in their joints, and their ability to live a quality life and remain active is greatly diminished.

When a Doberman is diagnosed with hip dysplasia and the choices for treatment seem limited to expensive surgery or questionable drugs, we recommend you begin treating your dog with Winston’s Joint System, an all-natural formula developed by a Naturopathic Doctor to heal his own beloved dog. This proven formula has been giving relief from pain and stiffness to all breeds and ages of dogs for more than 20 years.

Because hip dysplasia is primarily an inherited condition in Dobermans, there are no products that can prevent its development, however, you can slow, and sometimes halt, the progression of the disease.

There are different assumptions on how to prevent the progression of hip dysplasia in Doberman Pinschers. Poor nutrition, inadequate or improper exercise, and increased body weight may all contribute to the severity of osteoarthritis after the hip dysplasia has developed.

By watching the calories your puppy or young dog consumes and preventing obesity in your dog, allowing only non-stressful types of exercise, and a daily regimen of Winston’s Joint System, are the best things you can do for your dog.