Wotan’s gets better every week. He is much more alert and mobile than he was before he started on Winston’s Joint System formula.

Last time I wrote about Wotan, I promised you a video of him… 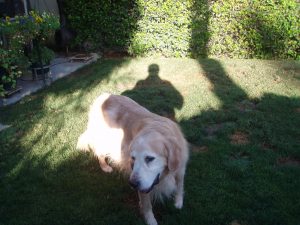 The road to recovery

The hip dysplasia in my Golden Retriever continues to improve every week. There are some days that aren’t as good as the others but he is still so much more alert, mobile, and happier than he was before he started on Winston’s Joint System for his hip dysplasia.

We go on walks every day even though the vet said it wasn’t necessary because he’s an old dog and should just be exercised minimally.

She doesn’t know that he’s recently renewed his friendship with several other dogs in the neighborhood. There’s a Miniature Schnauzer, a Pomeranian, a German Shepard, and a King Charles Spaniel that occasionally join us on our neighborhood walks whenever we’re out and about at the same time.

What is so encouraging to me is to see Wotan keep up with all of them even though their ages range from 3 years to 8 years old. Wotan is the “granddaddy” of the group but that doesn’t stop him from leading the pack.

A couple of the dog’s owners asked me what I’d done to improve Wotan’s health so much. They’d all seen him laconic and suffering so many times when his hip dysplasia started getting really bad.

When I told them he was taking a natural formula developed by a doctor for his own pet dog, they wouldn’t believe me. I even had to show the Winston’s Joint System bottles to one of the guys – a real no-nonsense ‘show-me-the-money’ kind of guy. He read and re-read the ingredients, and kept looking at Wotan, who was obviously convinced that the guy was just dying to give him a treat or bone, or some goody to eat.

I offered the neighbor a beer and we sat down to shoot the (you know what). He began telling me that he had a German Shepard as a pet when he was in his teens and the dog developed arthritis to the point where he couldn’t even stand up to make it outside to go to the bathroom. His father had the dog put down because it was such a problem to the family.

He had cried and cried for days he said. At fourteen, he felt he had lost the only thing in the world that really loved him. He admitted he’s been living in fear that his pet German Shepard was going to end up with the same terrible problem.

I said, “Take a look at Wotan. You remember how bad he looked during the last year and how we’d stopped going on walks with all of you. If your dog develops arthritis or hip dysplasia, the first thing you should do is order Winston’s Joint System.”

Personally, I hope this horrible disease never strikes his pet; but if it does, I know he’ll be able to restore his dog to good health in a short period of time, and he won’t be wasting money or valuable time trying drugs and procedures that won’t work.

Well, I’ll get back to you soon with more news and pictures of Wotan as he continues to improve in all aspects of his life.