Dogs are a favorite pet for senior citizens and there is plenty of research showing that dogs help seniors stay fit by urging them to exercise. The way the dog does this is by insisting that it be walked every day or be joined in a game of catch the ball or frisbee. Dogs also encourage seniors to participate in other activities with them. 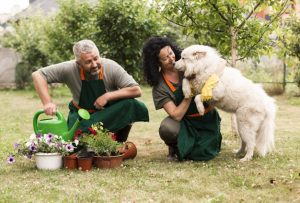 Walking is by far the favorite way for seniors to exercise with their dog. According to a poll by AARP, sixty one percent of people aged 65 or older who own a dog, exercise by walking their dog. What may surprise a few people is another statistic from the same poll: fifty four percent of people between the ages of 50 and 64 who have a dog also exercise by walking with their pet.

Of this same group of 50-64 year olds, forty two percent also play catch or toss a Frisbee with their dog as a fitness routine, while twenty six percent of the seniors aged 65 or older who own a dog, exercise with their dog in the same way. Other favorite ways of exercising that both age groups regularly do is jogging and wrestling. Yes, wrestling with their dog. Respondents said that they love to wrestle at home with their dog and also when they go to a park for exercise.

Research seems to indicate that people who exercise with their pets are more likely to stay on a regular fitness program. Walking, jogging, or playing catch with their dog provides the same exercise benefits for both the person and the dog, helping keep muscles and joints flexible and aiding in controlling weight gain for both.

Taking care of a dog is not something everyone can do or is willing to do every day of their lives. Dogs come with a lot of responsibility for the owner. A dog must be fed regularly and always have access to fresh water. Dogs need a fenced in yard to play in or they must be taken for a walk at least twice a day to take care of their biological needs.

The cost of buying pet food, regular checkups by a veterinarian, and necessary vaccinations can place a heavy burden on seniors dependent upon Social Security for their retirement income. Sixty percent of people 65 and older and thirty seven percent of those between the ages of 50 and 64, say they don’t own a pet for these very reasons.