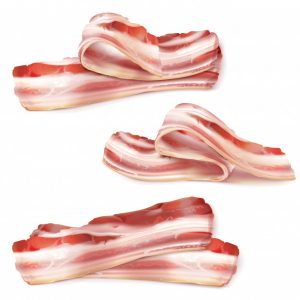 “I had rather be shut up in a very modest cottage with my books, my family and a few old friends, dining on simple bacon, and letting the world roll on as it liked, than to occupy the most splendid post, which any human power can give.” -Thomas Jefferson

Oh yum, yum – I know what that man meant! Bacon and dogs are just the perfect combination…that is if you’re a dog. Bacon, that most wonderful of foods, had to have been designed especially for a dog like me. There is something about bacon that is just irresistible to me – and also to my friends who love to come over for a bacon breakfast every Monday after my master leaves for work.

Is it the way the bacon sizzles in the pan, or that hunger-pang inducing aroma that fills my nostrils when the bacon hits the heat? Whatever it is, one thing is for sure: I love bacon! I admit it’s more than love – I have a passion for bacon. Bacon was meant to fit nicely between my teeth and find its way down into my hungry stomach.

But cooking those strips of bacon is not as easy as you would think. I’m all paws when it comes to fetching the skillet, turning on the stove, and hardest of all, getting that darn bacon package open. Good thing my teeth are sharp or I’d probably never get the bacon opened.

Getting the strips into the frying pan and then getting them out when they’re done – and not burning my tender paws in the process – is a real feat. In fact, only my friend Daisy and I are able to cook the bacon. The other guys and girls just sit around on the floor, drooling over the smell of the bacon sizzling in the skillet.

Sourdough, our Saint Bernard friend, likes to lie on his back and toss a hot bacon strip from paw to paw, finally springing his gigantic head up and grabbing the bacon strip between his monstrous teeth. Not very couth but he doesn’t care. Gloria, our prima donna Shih Tzu, always eats her bacon delicately, biting off small pieces and slowly chewing until there’s nothing left but a trace of grease on her mouth. Gloria likes to brag that she was named after a famous actress who lived on a street called Sunset Boulevard, wherever that is.

I used to hate having Wheezer, a German Shepard mix, come for our Monday bacon breakfast because he’d gobble down his strips as fast as he could and 20 minutes later he’d have the worst smelling flatulence you could imagine. We kept suggesting that he have his master order Winston’s Digest All for his gas problem. Finally Wheezer started taking the Digest All and now there’s no more unbearable odors coming from him. We no longer have to avoid him after our bacon feasts. Winston’s Digest All seems to have handled Wheezer’s gas, his bloating and flatulence, plus he’s actually lost some of the flab that made him look a little roly-poly.

Now for you dogs out there who don’t have a great deal of experience in the kitchen, I’ll give you some lessons on bacon preparation. Bacon and dogs are a perfect match but if you’re a dog you have to know the right way to prepare bacon. Pan frying is the best way to cook bacon and it always turns out to be a wonderfully crisp, flavorful treat we all love. It takes some time to learn how to handle a skillet, turn the stove on and off, and get the bacon in and out of the skillet. But when the end result is so delicious like bacon is, it doesn’t matter how many tries it takes before you can handle the whole job.

The Classic Pan Fry is bacon the way it should be cooked: on the stove and in its own grease. You need to use a large flat frying pan and lay out the bacon strips in the pan so that they don’t overlap. Cooking only one or two slices at a time can cause problems because there won’t be enough bacon to fill all the hungry stomachs eagerly awaiting the yummy, greasy strips. But if you overlap the bacon strips, part of some won’t get cooked, and those don’t taste anywhere near as good as the crispy ones.

Please don’t throw cold bacon into a hot pan that’s been heating on the stove. I can tell you from my own unfortunate experience – you don’t want to do that. Hot grease burns right through your fur! Set your bacon out for several minutes before you cook it. That lets the fat loosen up a bit and makes the final cooked strips taste even better. When you’re ready to cook, place the bacon in a room temperature pan and then place it over medium heat. This allows the bacon to gradually take on the heat and cook more evenly and avoids the scorching that results from dropping the bacon into a pan on high heat. Once the bacon begins to sizzle, you’ll feel like you’re in dog heaven.

If you don’t have the twenty minutes it takes to slowly cook the bacon, you can use a microwave. I’ve watched my master make bacon that way but I played around with it once when he wasn’t home and I could never get those buttons to work. My paws, small and masculine as they may be, just can’t manage to hit only one button at a time, no matter how hard I try.

The bottom line is – nothing tastes as good to dogs as freshly cooked bacon. If you’re forced to eat that crappy kibble stuff that comes in those giant bags, then instead of forcing yourself to eat all of it, hide some under the rug or a chair and pretend you ate it all. Then when your master isn’t home, get out that skillet and go to work. Paradise awaits!