Peanut allergies in dogs? Who ever heard of such a thing? This is definitely something most pet owners would probably never think about, but if a dog is allergic to peanuts it can make an animal truly miserable when it contracts the allergy. 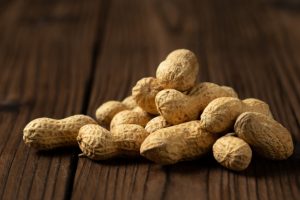 Like other canine food allergies, peanut allergy in a dog demonstrates itself by causing itching, redness and bald spots. Some dogs will also chew on their feet and legs attempting to stop the itching.

Food allergies may seem to develop without warning but actually take a long time to develop. A food that has caused no problems in the past for a pet, can suddenly cause an allergic reaction the next time it is consumed, and the dog’s body will create histamine to fight the offending allergen.

Histamine is the chemical that causes the physical signs or symptoms of an allergic reaction in dogs, and also in people.

All food products consumed by humans must be labeled with a warning if the food contains peanuts or has been processed in a facility where peanuts or other nuts are also processed. Unfortunately, this warning requirement does not apply to manufactured dog food.

If you suspect your dog may have a peanut allergy, first try to eliminate any other possible substance that could cause the same reactions as peanut allergies, including environmental causes like mold and dust. Also check the labels of your dog’s food for any ingredients that don’t sound familiar, especially if you’ve started feeding your pet a new brand or type of dog food.

To help determine whether a diagnosis of peanut allergies in a dog is a viable one, a vet will do skin tests on a dog to rule out any environmental causes. In these tests, small amounts of an allergen are injected under a dog’s skin to see if it produces an allergic response from its body. If there are any positive results to the skin test, the dog may be allergic to something else in addition to peanuts.

Blood tests can also help eliminate environmental causes by combining small amounts of different allergens with samples of a dog’s blood. If an allergic reaction occurs during the test, an environmental allergy is probably the cause.

Once a veterinarian has examined and rejected any environmental probabilities, food allergies are the next tests to be conducted. To diagnose a food allergy, a veterinarian usually recommends a diet that contains only protein and carbohydrates for your dog, minus the numerous (and sometimes unhealthy) added ingredients found in manufactured dog foods. Both the protein and the carbohydrate will be derived from foods the dog has never eaten before to help determine what the dog may be allergic to. This diet will probably need to be fed to a dog for about 12 weeks.

Peanut allergy in dogs is not a trivial matter to a dog who develops allergic reactions that include itching, redness and bald spots on its skin. Avoiding peanuts is the best way to prevent reocurrences of this allergy which means you’ll need to read all the ingredient labels on manufactured dog foods you buy, including treats and medications, to prevent accidental consumption of peanuts.

The history of Rimadyl dates back to January of 1997 when Pfizer Pharmaceuticals first introduced the drug to veterinarians. The generic for Rimadyl, Carprofen, was marketed much later. Many dog owners whose pets suffer from arthritis or hip dysplasia believe that Rimadyl has improved the quality of their dogs’ lives. However, as a responsible dog owner, you need to be aware that there is sufficient evidence proving that Rimadyl can have very serious side effects for an animal.

Some dogs have died after being prescribed Rimadyl. Most of these cases have been attributed to the unexpected and swift onset of the well-known side effects of Rimadyl.

Labrador Retrievers, as well as their cousins, the Golden Retrievers, are more prone than most breeds to developing hip dysplasia, arthritis and other debilitating joint diseases. Pfizer first reported that Labradors were particularly at risk from Rimadyl’s toxicity. Pfizer’s report on side effects that occurred during the drug’s initial post-approval phase states, “. . . approximately one fourth of all hepatic reports were in Labrador Retrievers.”

This is an alarmingly high rate of incidence and if you are the owner of a Labrador who suffers from a debilitating joint disease and your vet has prescribed Rimadyl, you need to exercise extreme caution so you are not putting your dog’s health or its life at risk. Besides Labrador Retrievers, many breeds who have been prescribed Rimadyl have experienced side effects or death from Rimadyl.

Your veterinarian should pre-screen your dog before prescribing Rimadyl. Follow-up testing and close monitoring of the dog for possible toxic reactions is equally important.

Rimadyl or its generic Carprofen are not recommended for dogs who have bleeding disorders, liver disease, inflammatory bowel disease, or are inclined to suffer from gastrointestinal ulceration.

Rimadyl should never be given along with any other non-steroidal anti-inflammatory drug (NSAID) such as aspirin, or any corticosteroids such as prednisone, prednisolone, or dexamethasone. It is also not advisable to give the drug to pregnant or nursing female dogs because it has not been tested as being safe for the mother or the unborn puppies.

Before agreeing with your vet that Rimadyl is the best solution for your dog’s joint problems, discuss the benefits of the drug against the risks. It has been widely reported that many veterinarians are not completely informed about the serious side-effects of Rimadyl.

If you decide your dog might benefit from Rimadyl and you believe that it’s worth the risks involved, ask your veterinarian to start by prescribing the lowest possible dosage that can be used to obtain relief, and then increase the dosage if necessary. The recommended dosage is one mg per pound of a dog’s weight, given twice a day. It’s possible that your dog may obtain relief at a lower dosage which might possibly help in avoiding toxicity. Some vets recommend that Rimadyl be used only for a period of several weeks, followed by several weeks off the drug to give the dog’s liver time to recover from the toxic effects of the drug.

As soon as your dog begins taking Rimadyl you need to carefully watch for the following symptoms which are signs of potential life-threatening reactions to the drug:

• loss of appetite
• refusal to drink water or an increased thirst
• vomiting – occasionally with flecks of blood in the vomit
• diarrhea
• black, tarry stools
• lethargy or unusual drowsiness
• hyperactivity or constant restlessness
• sudden aggressiveness when none was evident before
• weakness or partial paralysis
• seizures or loss of balance

If any of these symptoms occur, IMMEDIATELY STOP giving your pet the drug and take it to the vet. The earlier you discover the problem, the better the chances your dog will have a complete recovery.

Is Rimadyl a “miracle drug” for dogs or are the potential side effects too dangerous? The history of Rimadyl has been plagued with several serious problems; (1) a lack of adequate warnings about the potential serious and deadly side effects of the drug, (2) the large and unacceptable number of veterinarians who are unaware of Rimadyl’s serious side effects, and (3) the severity and sometimes sudden onset of the side effects which can result in the death of the dog being given Rimadyl.

If your pet suffers from any of the following joint problems, you should place it on a daily regimen of Winston’s Joint System to give welcome relief from its pain:

With the information presented here, and a consultation with your vet, you should be able to decide whether the risks of administering Rimadyl are worth the possible benefits. For myself, I’d rather be safe using Winston’s Joint System than be sorry and endanger my loving dog’s health or even worse, contribute to its death.