His owner decided to try Winston’s Joint System and he’s sharing his experience with us. Read their journey…

Hip dysplasia in a Golden Retriever is an all too common problem in these beautiful dogs and I have experienced it first hand with my beloved Wotan. 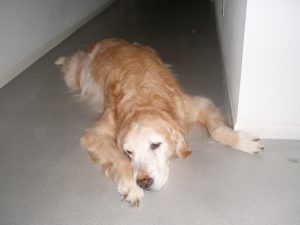 Woden was an important figure in folk religion and folklore throughout the Middle Ages and even into the Modern Period and can be found in English, Swiss, German, and Scandinavian traditions. Some believe he was the precursor of the American Santa Claus.

Wotan was bred to be a seeing eye dog for the blind. He didn’t graduate from Guide Dogs of the Desert after completing his training because he was too friendly. A guide dog must focus only on its owner and ignore other people and animals vying for their attention.

Personally, I think Wotan just decided it was more fun to be petted, coddled, fed yummy treats, and garner a lot of attention from everyone he met rather than focusing on one person and always being “on call”.

One facet of his training that has persisted (which I find wonderful at times and slightly annoying at other times) is his laser-beam focus on me.

I’m a busy person who works out of his home and I am back and forth between my home office and the other rooms in the house all day long. He likes to lie at my feet no matter what I’m doing, and every time I would get up from my chair, even if just to fetch a cup of coffee from the kitchen, Wotan would get up and follow me.

I felt like he was attached to my hip. This kind of devotion from a beloved pet is contagious and so easy to get used to.

Sadly, advancing age brought about a major change in Wotan’s ability to get around and really enjoy life as he has for so many years. He was suffering terribly with hip dysplasia in his right leg and the disease had been progressively getting worse until it reached the point where he could no longer manage to get up onto the back seat of the car and go for the rides he used to enjoy so much.

He began to refuse to go on the leisurely walks we used to take around the neighborhood 4 or 5 times a day as he had a difficult time trying to step up on a curb from the street and frequently he would collapse on his hind legs after a short distance.

It was emotionally painful to see this deterioration in my beloved dog, but even worse, I could tell he was suffering from constant pain, especially when he took so long to stand up on all fours or had such a slow, difficult time lying back down. He would find himself stuck in narrow areas in the house where he used to easily turn around in them.

After many months passed we went to the vet so he could have a complete exam, focusing mostly on his hip dysplasia. After the vet had examined Wotan, I was advised against bringing him in again unless it was an emergency because he was an old dog and it was too hard on him to get in and out of the car just to go through routine checkups.

The vet chose not treat him with any type of medicines for his hip dysplasia because she didn’t feel they would help much at his age and the treatments were often painful, and expensive for me and they resulted in few positive results.

Living with Wotan every day and watching the quality of his life continue to degrade caused me unbelievable emotional pain. There seemed to be nothing I could do to help relieve his suffering and he was having some very bad days.

Friends who came to visit who had known Wotan for many years, said I should consider putting him to sleep because it wasn’t fair to let him suffer so much. Although I certainly didn’t want him to suffer at all, the idea of no longer having him in my life brought tears to my eyes whenever I thought about it. Unless you’ve ever loved a dog the way I loved Wotan, you’d never understand that kind of pain.

It kept getting worse

Hip dysplasia in a Golden Retriever is a sad thing to see develop in a dog this beautiful. He reached the point where all he wanted to do was lie in a corner alone. 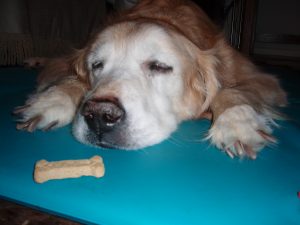 He didn’t come galloping to the kitchen anymore when I was preparing his meals and sometimes I had to take his bowl to wherever he was camped out and place it in front of him so he could eat. Having had a voracious Golden Retriever appetite his entire life, I was saddened to see him lose interest in what had always been a highlight of his days.

One day I noticed his beautiful brown eyes had clouded over and I was afraid he was going blind. I called the vet and was told that clouding over of the eyes in older dogs was normal and he would still be able to see fine. I hoped that would be true.

A moment of absolute terror

Many months ago I took Wotan for a very short walk because I hoped that a little exercise might help him. It was an ordeal that I never want to put him through again.

After about 10 steps he suddenly collapsed on his rear legs and rolled over on his side. He started breathing heavily, taking shallow, labored breaths rather than his normal fast panting when he’s hot or exhausted. His tongue lolled out, his eyes bulged, and I thought for sure he was dying!

At the animal hospital

With the help of a neighbor I got him into the car and sped off to the animal hospital. There two of the nurses helped me carry him inside where the doctor immediately examined him.

He had X-rays, blood tests, and an injection for the pain and to help relax him. When I was later shown his X-rays I could see how radically different his right hip looked compared to his normal left one.

I was told the blood tests to check him out thoroughly would be complete in a few days and I’d receive a call from the doctor with the results. After being handed the bill, I’d swear he must have had an organ transplant too.

While I was waiting to pay, Wotan was being wooed by a very active little 11 year-old female Golden. She wasn’t getting any attention from Wotan no matter how coy she acted.

When we walked out the door together, the Golden’s owner asked me what I was doing to treat his hip dysplasia. I told her the vet said there really wasn’t anything they could do that would be of much help to him.

She then told me the story of Lucy, her red-haired Golden and how Lucy had also suffered from severe hip dysplasia. She said two different vets had given her the same diagnosis about treating Lucy’s hip dysplasia.

Over the course of 14 months this woman had gone online and ordered six different products on the internet that were supposed to treat hip dysplasia in dogs, but they either caused Lucy more distress, or the side effects turned out to be worse than the suffering Lucy already was enduring.

One day her mailman asked why Lucy never came to the window anymore when he delivered the mail. When told the reason, his response was “I’ve got the perfect solution for your dog”. He told her about Winston’s Joint System from DogsHealth.com, a naturopathic medicine developed by an MD to treat his own beloved dog. He said his pet Boxer developed a severe case of hip dysplasia at age three and was so debilitated that he considered having him euthanized to end the dog’s pain.

A fellow mail carrier told him about Winston’s formula one day so he ordered it and started his Boxer on the daily regimen. Within one month the dog began to show improvement. After two months the Boxer was getting up and down without a lot of effort, and each month thereafter brought more relief for the dog.

Finally the Boxer was back to his old self again, running along the inside of his fenced-in yard, barking fiercely at the regular mailman delivering the mail!

What she told me gave me hope that there could be something out there that would help Wotan recover and lead a normal life again, so as soon as I got home I went online and found Winston’s Joint System for hip dysplasia.

After reading doctors’ statements and testimonials from other dog owners about how Winston’s Joint System had helped their pet dogs recover from this debilitating disease, I felt a burst of hope that this could be what I needed to save my dearly-loved dog.